7 Days to Die - Builds and Bases

Description: Jon's Ham Radios (or more boringly remnant_burnt_05) is a large, multi-floored POI that appears in the Burnt Forest biome in the Navezgane map. The location makes it pretty ideal as both a home base and a horde base since the Burnt Forest biome is pretty forgiving difficulty wise but still benefits from a reasonable lootstage bonus.

The multiple, pre-existing floors make it a quick and resource light POI to segregate into separate storage, cooking and crafting areas whilst still ensuring everything is raised off the ground floor in a zombie safe manner! Being a vertical structure, it does mean your heatmap will be constantly increasing as you forge and cook in it, but it is defensive enough that the occasional witch spawn or wandering horde attack shouldn't present any issues. 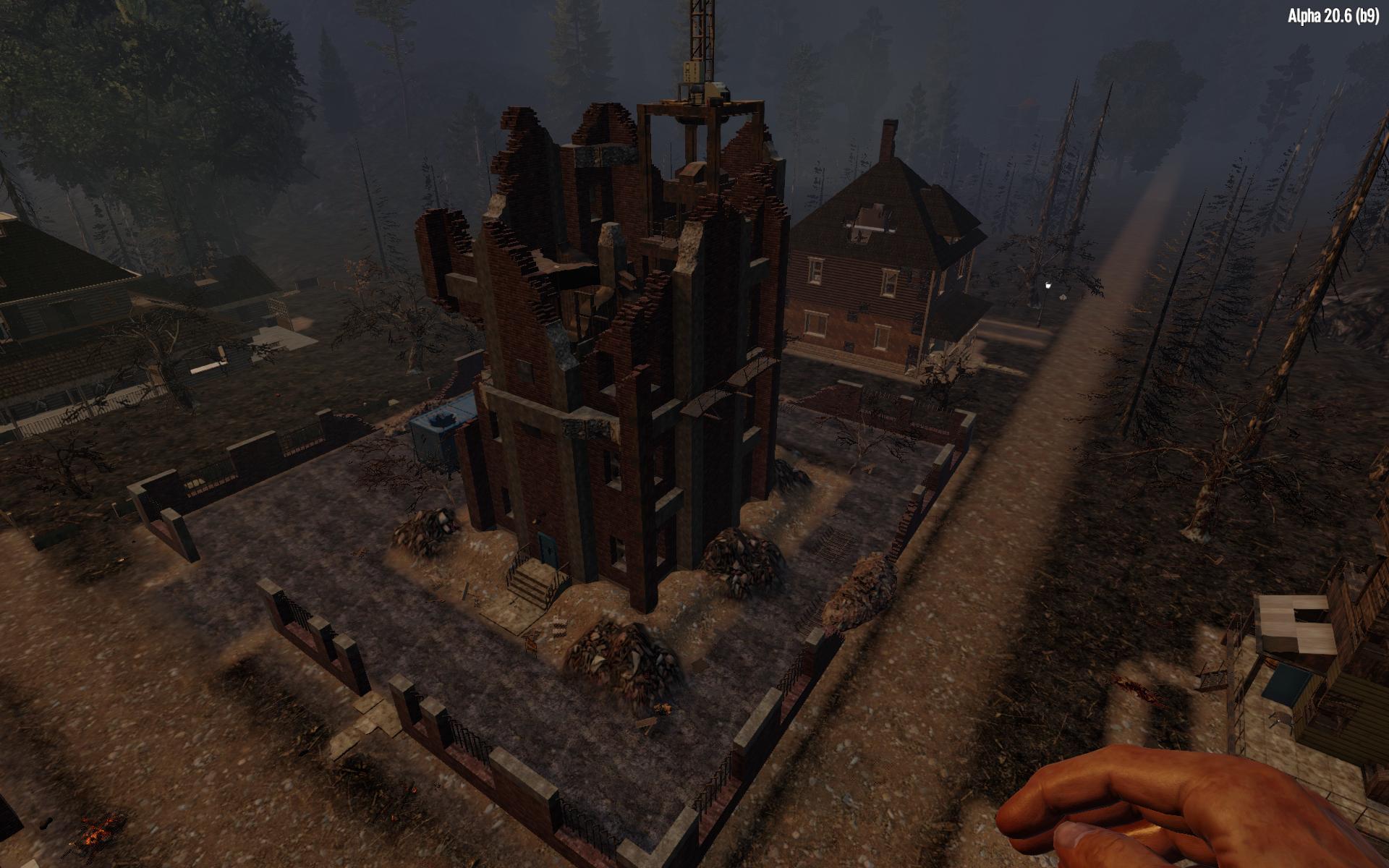 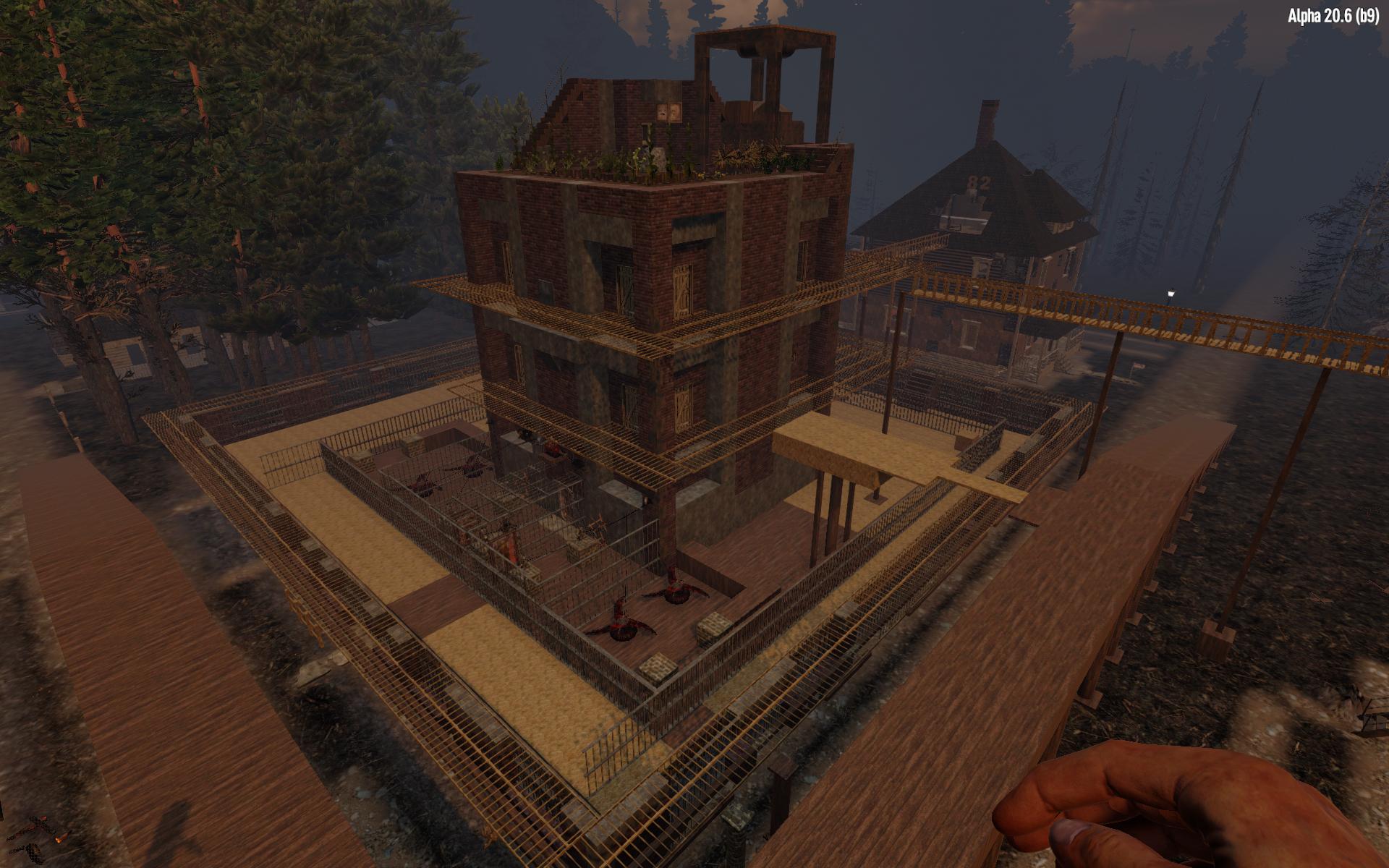 A lot going on in these images! Some of the main things you’ll see are the additions over time, first I fixed up the exterior wall, added some horizontal bars around it, then focus turned to the building's walls, slowly fixing them from the ground floor up and eventually adding more horizontal bar catwalks around the building.

I repaired the roof, added a rooftop farm and then fixed ALL the brick work.

Finally, I added a large ramped area outside to ride up and over the defences on (since they don’t have doors) and a poor man’s drawbridge of frames that I pick up on horde nights. You can also see an interior caged area with blade traps that came about in the later stages when I decided the current perimeter was too big to defend effectively.

You can also see some catwalks leading off to nearby buildings, check out "My Shame" below for more on them! 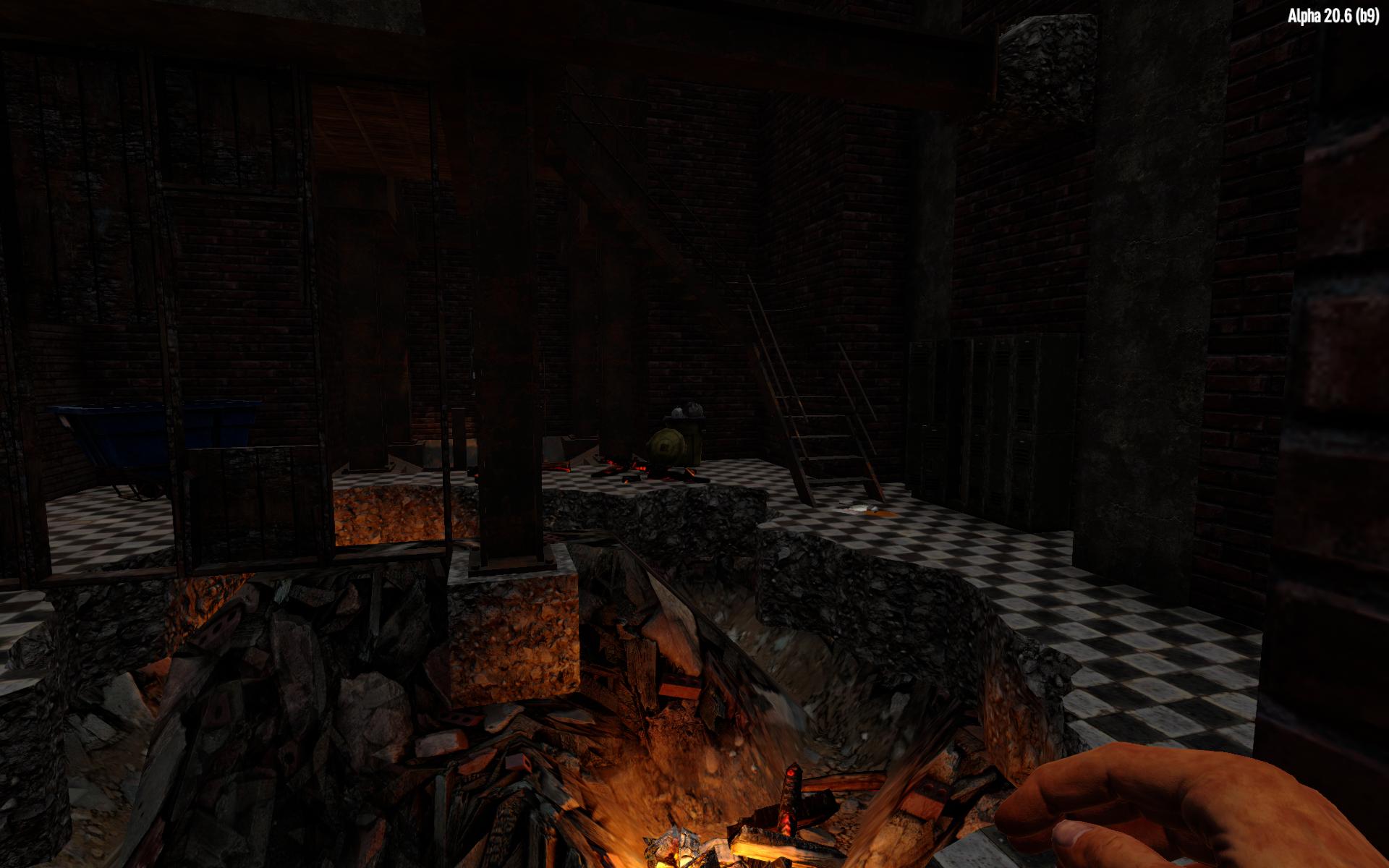 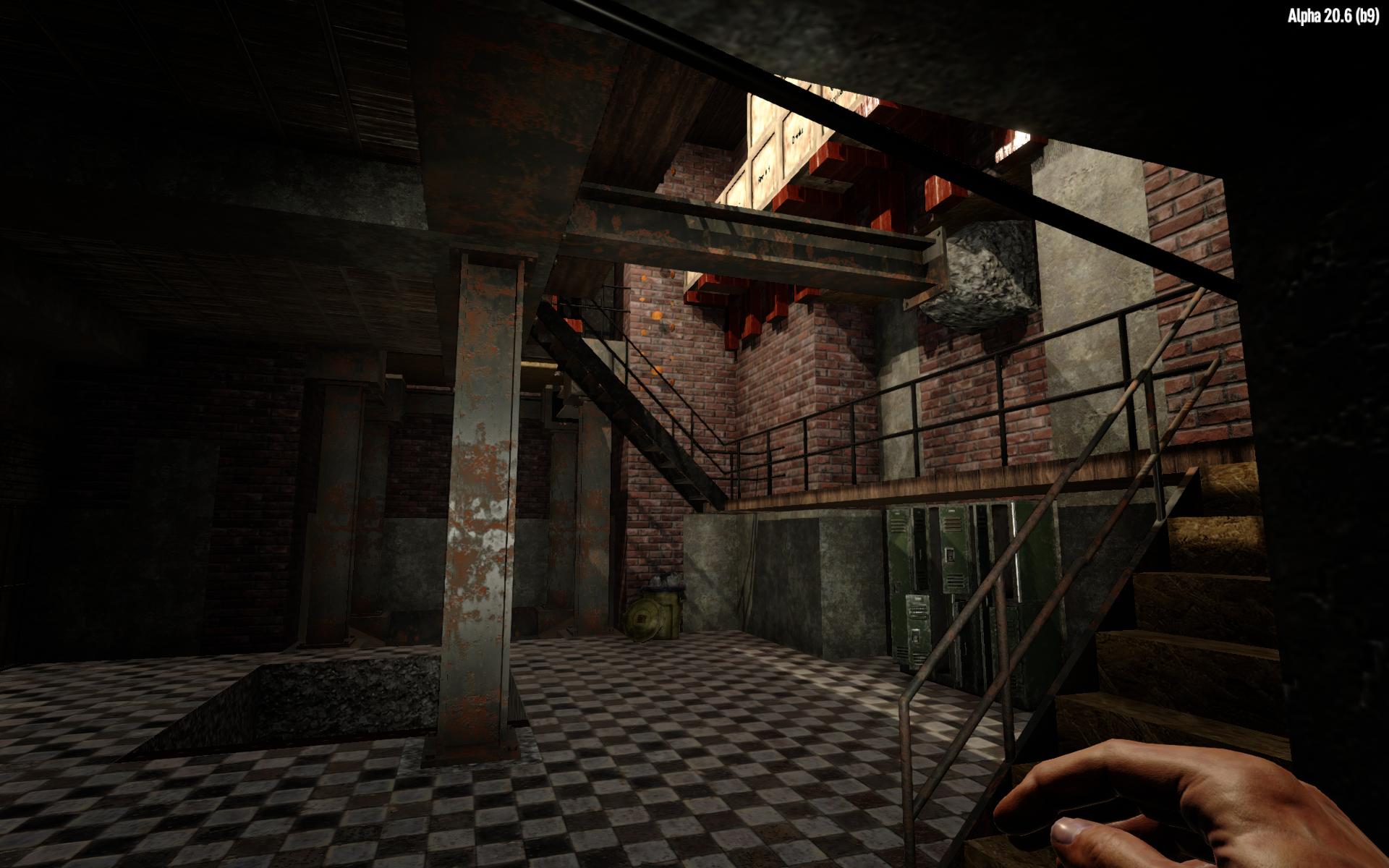 Cleaned up the floor and removed most of the interior walls. Extended the staircase out so if zombies did get in (which they did once or twice) they had a little further to travel to get up to me. Stairs are also left as frames so that they can be picked up on horde nights (although I never needed to).

Hole in the floor leads down to a mine, no pics of that though as not much to see in it, just corridors leading off to nearby hills of coal, etc. 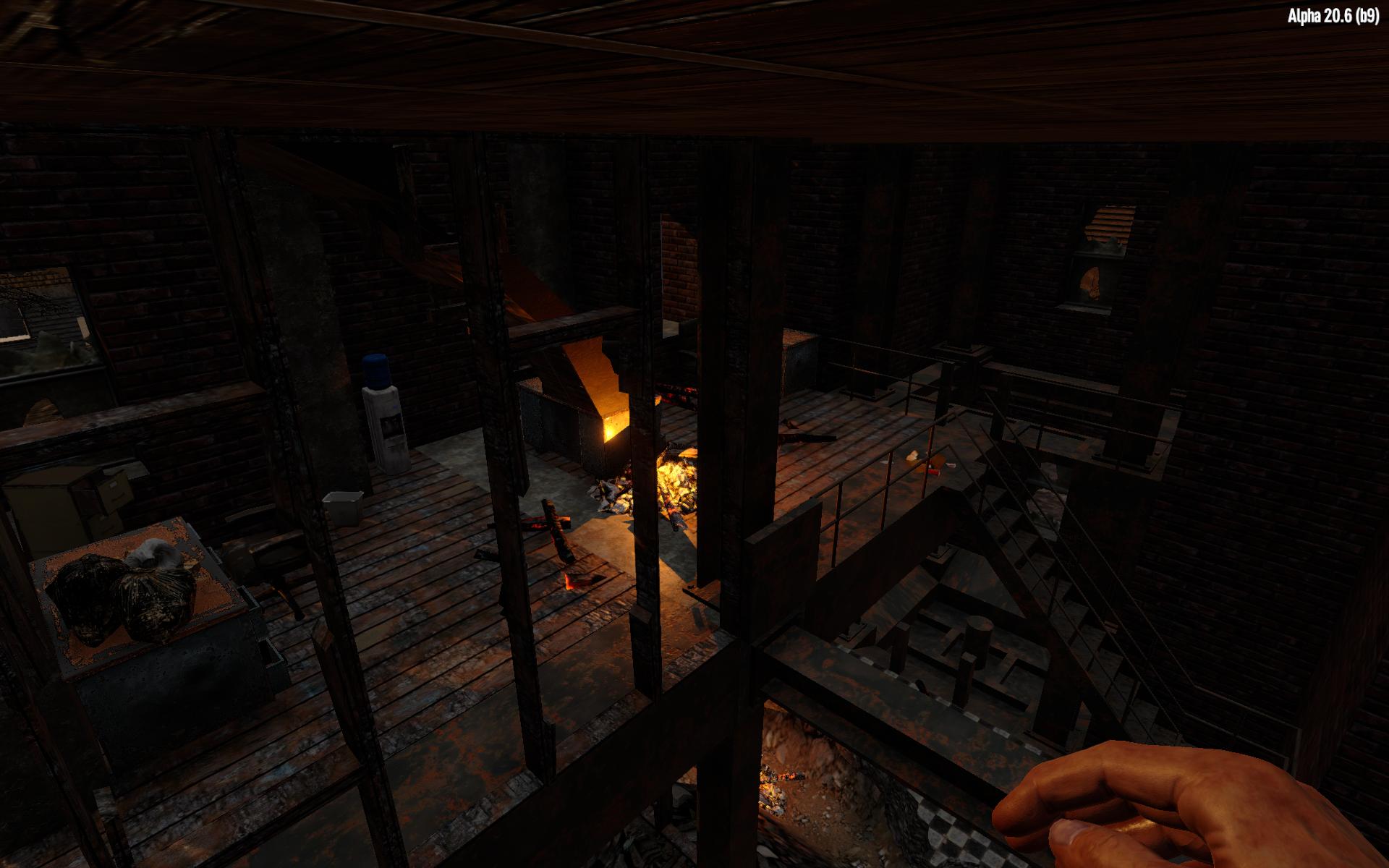 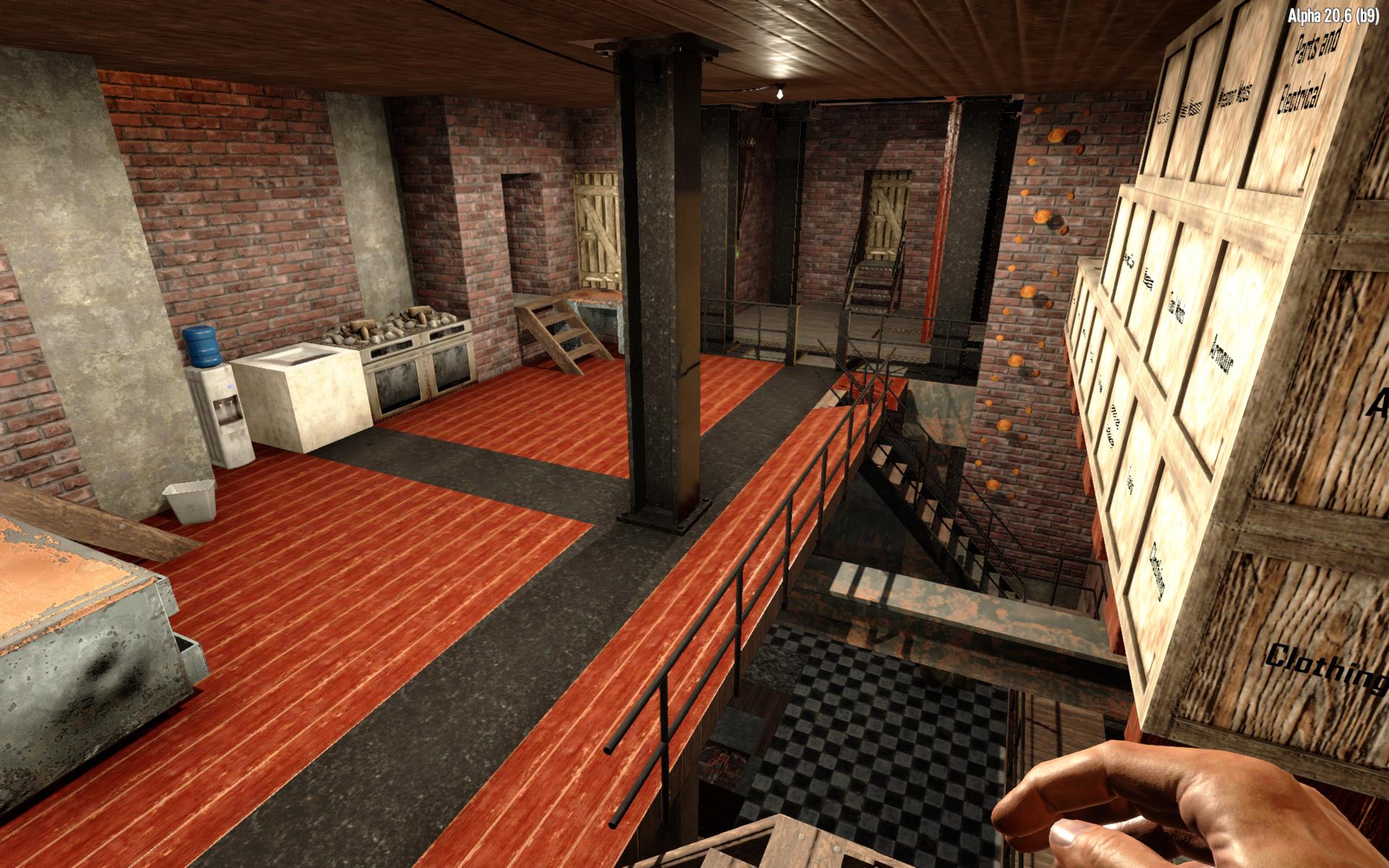 The stairs to the right of the image are where you come up from the ground floor.

Main cooking and storage area. Kept a few of the POI features for ascetics such as the water cooler and desks. Repainted the floor and metal work and added storage along the walls, out of reach of zeds should they get in! One of the biggest worries of using a home base as a horde base is losing all your storage, so keeping it out of reach is my defence against that!

Also added mushrooms here as an indicator for when my roof farm is ready for harvesting.

Ladder right at the back, in the old elevator shaft, leads up to the next floor, light switch is opposite it and you can see doors to the lower catwalks dotted around the walls. 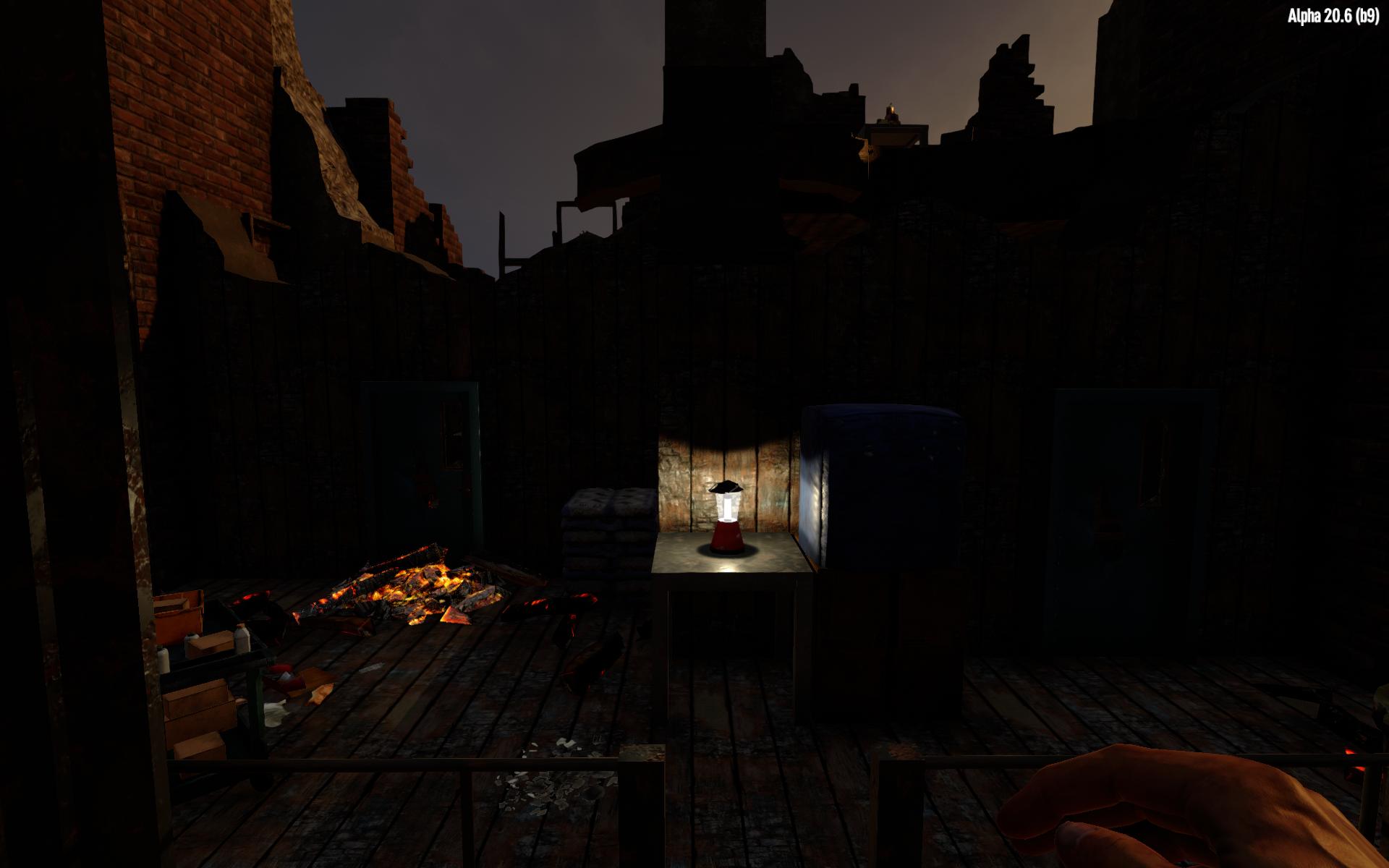 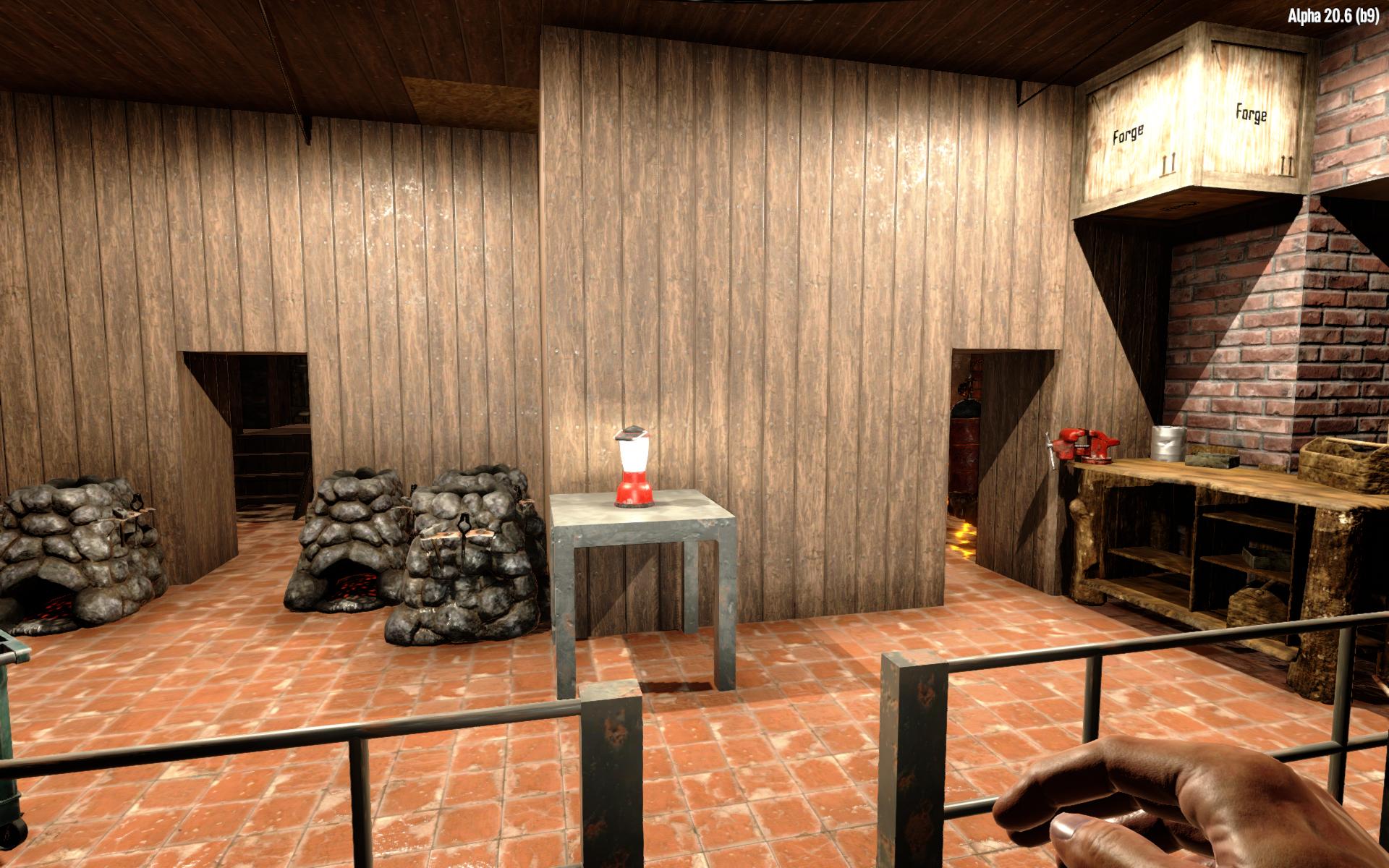 Looking out of the elevator shaft from the top of the ladder in the previous pic.

Forging and construction area. Chemistry stations are through the back, cement mixer is just to the right. 6 forges, 2 chemistry stations, 1 workbench and 1 cement mixer, no issues so far with through put. Also has doors to the upper catwalks dotted around the walls. 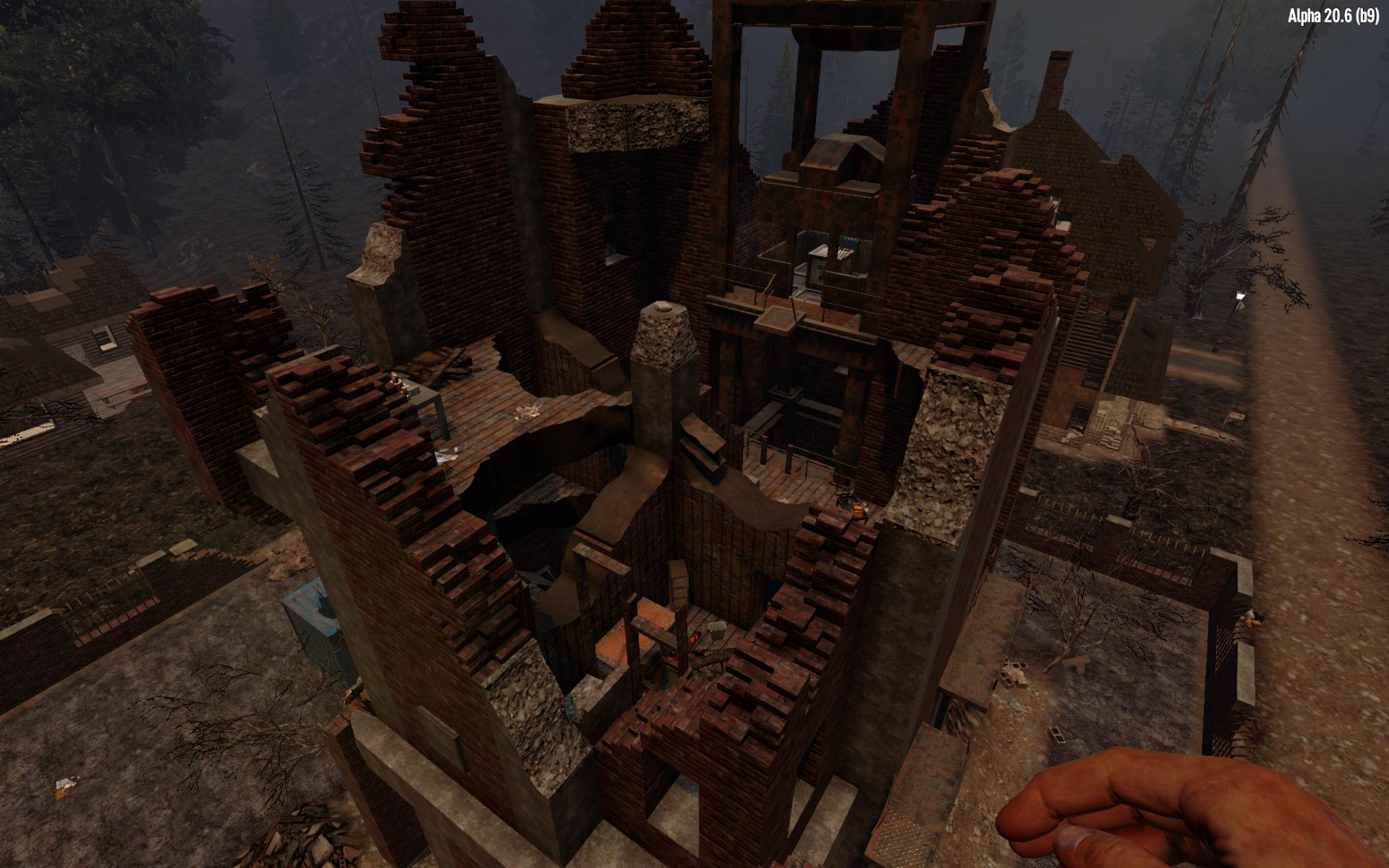 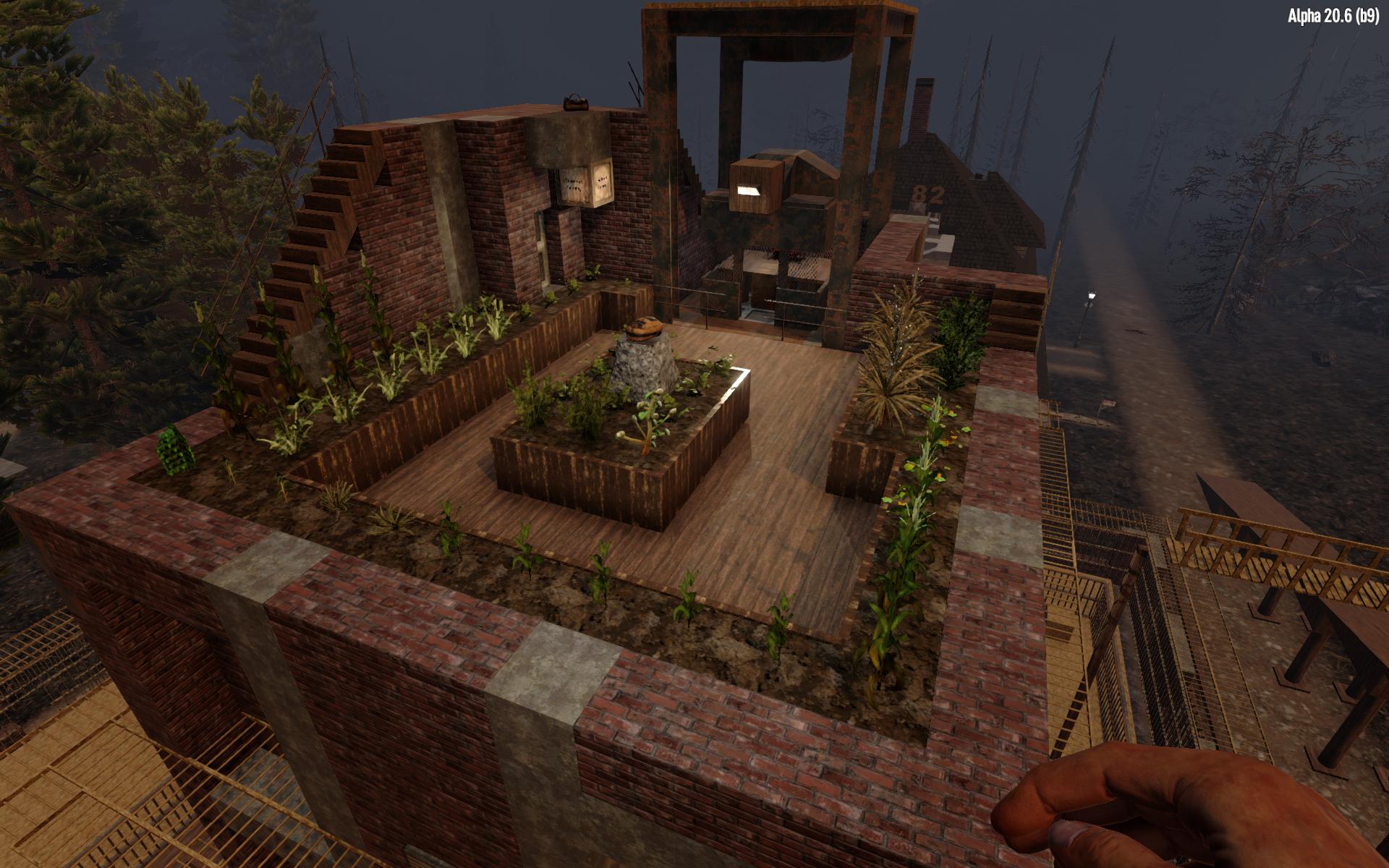 A base isn’t a base without a farm on the roof! Just a semi random selection of seeds planted since I was stat’ing into things other than Living off the Land. Couldn't see me needing much more than this regardless though. Note the 82 in the background, more on that later! 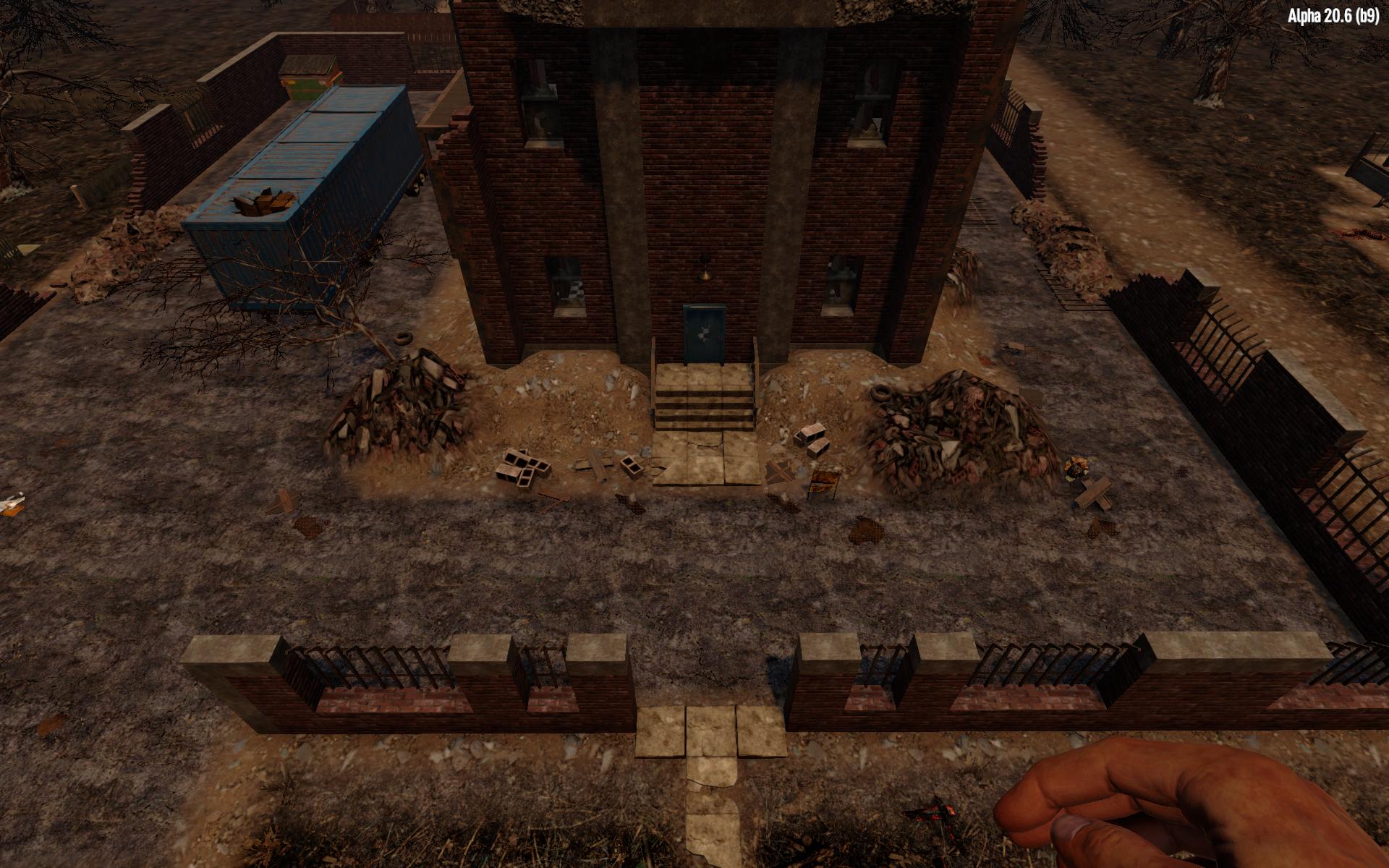 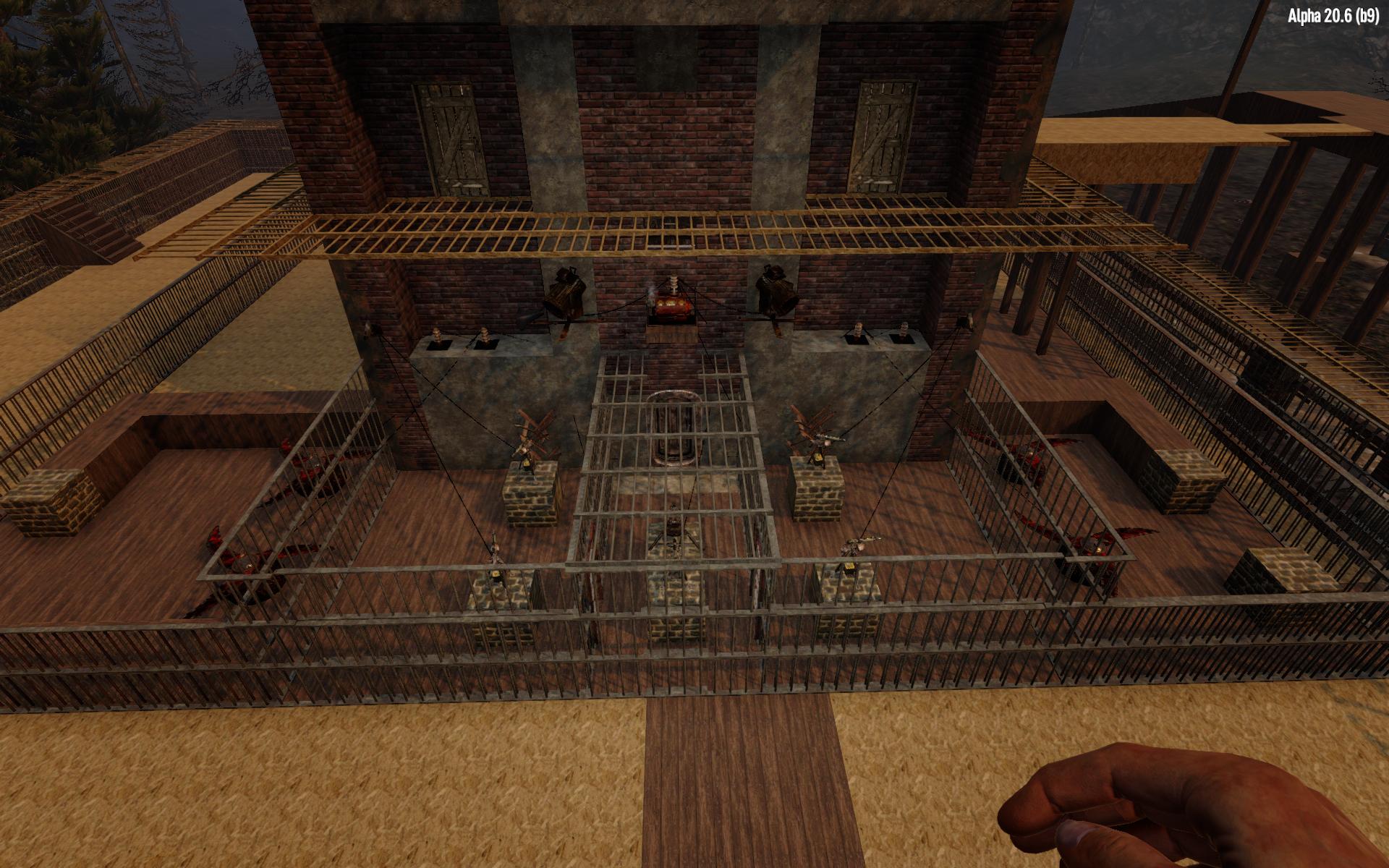 This worked pretty well. No where near as efficient as a kill corridor but a lot of fun! Going from the inside out we have:

I finished up on day 80ish and things were holding up fine. No demolishers by that point though, and I'd probably in trouble when they did appear, although the layers of cages may help keep things safe! 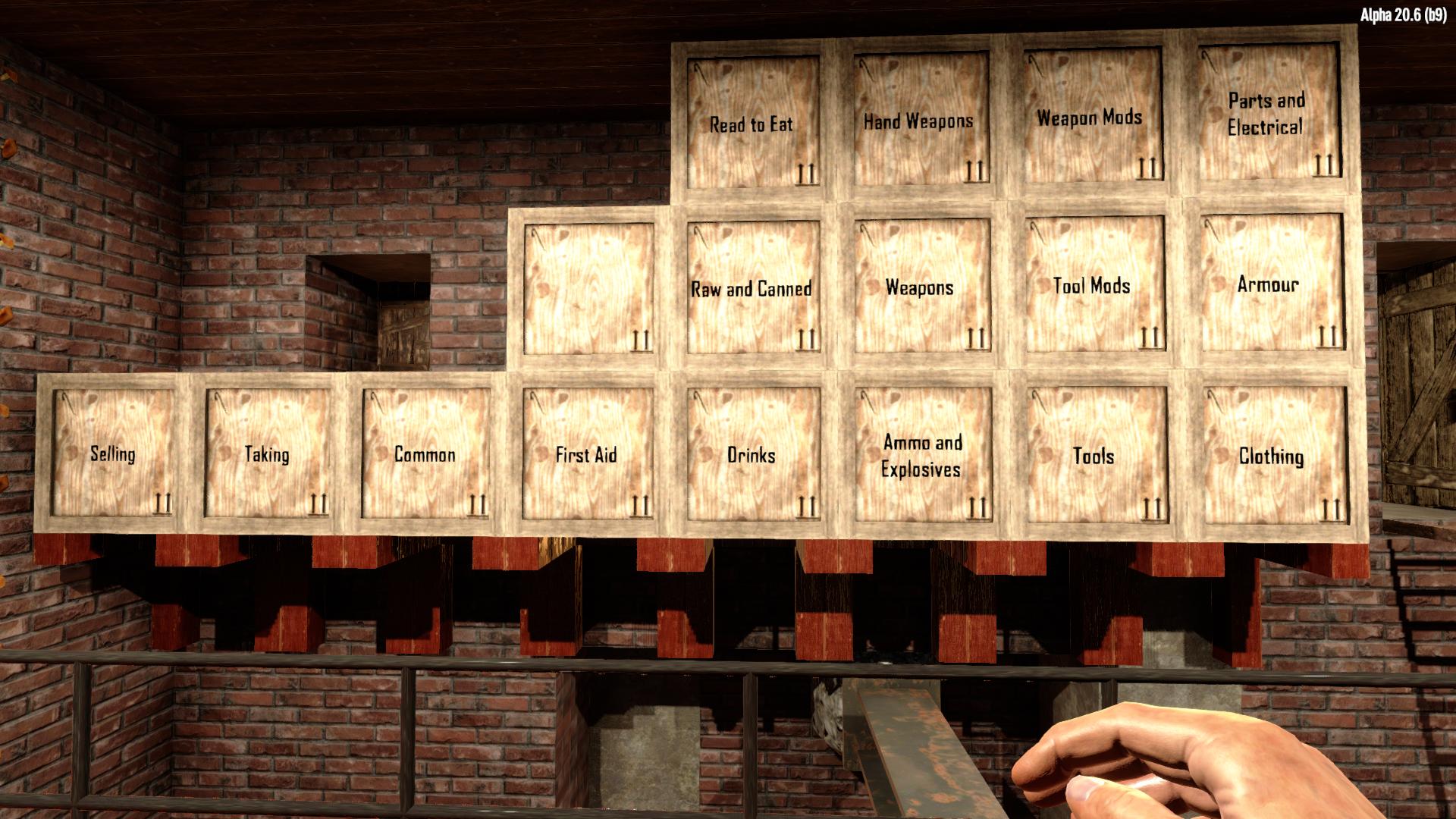 A fairly typical storage set up of mine with things divided down far enough that they are easy to find. I'm a bit of a hoarder so the Mod boxes normally end up overflowing, but I've tried to limit myself to 4 of a given item and then selling off the excess.

The box labelled "Taking" was my "Dump" box (which you could access from outside as well through the hatch) but then when I moved base I repurposed it to the stuff I was taking with me.

"Read to Eat" was "Ready to Eat", not sure where the missing "y" went, a zombie must have stolen it! And the blank box was just one too many that I made. 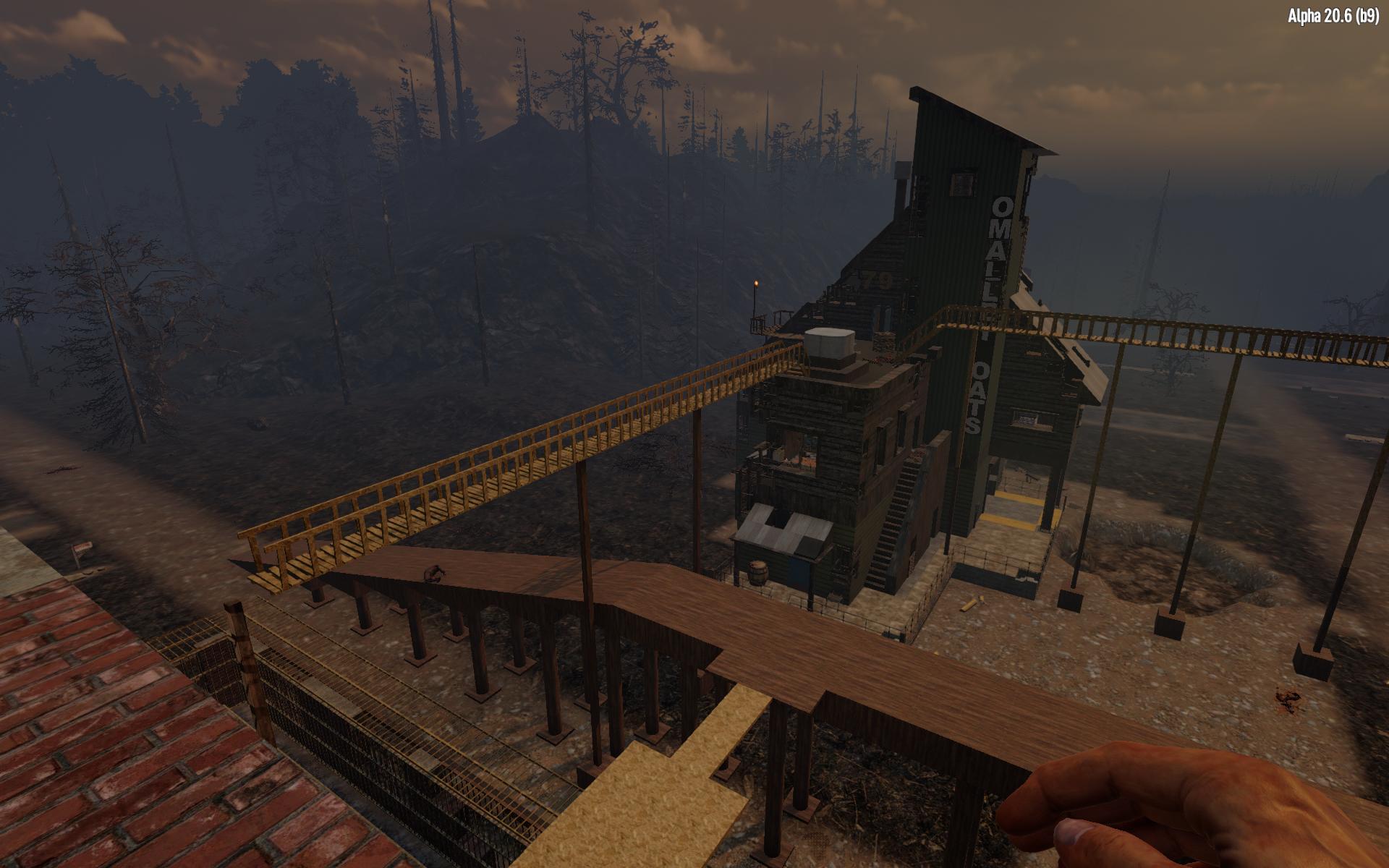 I’m ALMOST a no cheese player, but I just can’t help myself from relooting POIs when the loot respawns! So here are my catwalks leading to neighbouring buildings so you can skip most of the POI and go straight to that end stage booty! I even mark the buildings, such as this one with 79 and the previous image with 82, with the last day I raided them so I can tell if there has been a refresh without having to visit them! I’m a cheesy cheese lover, I know!

Even with loot respawn off though I love the idea of catwalks between buildings. Gives it a real immersive feel as a more realistic way of going between buildings if constant zombie hordes walking below were a problem!

Overall, I really liked this POI. The fog from the Burnt Forest biome can get a bit tedious at times but you soon get used to it, and the fun of remodelling 3 floors worth of space well outweighs it.

I may come back to it some day and see if I can utilise the space a little better. My defences could certainly do with a rework and it might be nice to add the farm to the grounds instead of (or as well as) the roof. Some cleaner vehicle access would also be an improvement.

For now though, I'm calling this one complete.